We are based in the immense and hugely popular French resort of La Plagne, which is linked via the impressive cable car, the Vanoise Express, to Les Arcs, to form the Paradiski, one of the largest ski areas in the world.

La Plagne itself is made up of 9 separate ‘villages,’ one of which is Montchavin La Plagne, the collective name for the 2 village resorts of Les Coches and Montchavin. And this is where we have chosen to base ourselves – not least because we are at one end of the Vanoise Express cable car, so right in the middle of the Paradiski, making it simply one of the best places to explore this massive and varied ski area in one single lift pass.

It can take about 4 hours to ski from one end of La Plagne to the furthest reaches of Les Arcs, so it’s highly advantageous to stay right in the middle, which is Montchavin La Plagne (where we are!)

But it’s easy for us to say we’re perfectly located. I mean, we would say that, wouldn’t we? After all, everyone else does! So why not see for yourself? Look at a piste map of the Paradiski ski area, and you’ll see that Montchavin La Plagne is as close to being slap bang in the middle as you can be (without actually living on the cable car!)

We’ll admit, this can all be a little confusing. La Plagne? Montchavin La Plagne? Paradiski?! But don’t worry, we’ve got a bit more information on each of the different areas below to help you out. Essentially, what you need to remember is:

Check out the quick guides below for more information

Arguably one of the world’s most famous ski resorts, and certainly one of the best-known in France, La Plagne started as a ski resort in 1961. La Plagne is actually made up of 9 separate and distinct villages, so you can’t actually “stay” in La Plagne – in fact, you’ll need to be based in one of the separate villages, none of which are called “La Plagne”(!)

The different villages fall into two broad categories – modern and purpose-built, such as Plagne Centre and Plagne Bellecote, and traditional farming villages now set up for skiing, such as Montchavin La Plagne and Montalbert.

The skiing in La Plagne is truly excellent – there are 225kms of pistes of all types, and varied terrain from tree-lined blues to white-knuckle, couloir-style blacks. Less well known is the off-piste, which makes it a bit of a hidden gem, despite having what is widely recognised as one of the world’s top 10 most accessible off-piste runs – the North Face of the Bellecote.

As well as the volume of runs, the skiing has great vertical too – ranging from 1,250m to a whopping 3,250m. Combine that with skiing on a glacier and La Plagne truly is a snow-sure resort, and has something to offer every type of skier.

Unlike much of La Plagne, which is made up of high-rise 1960s apartment blocks, Montchavin has a much more traditional feel, and being situated amongst the trees, it really does have that quintessential skiing charm.

Montchavin is a picturesque, old farming village with pretty, traffic-free cobbled streets and traditional wooden chalets built with Savoyard stone and slate roofs. It’s a great place to wander around and from time to time, you can still catch a whiff of farmyard animals!

Chalet Chocolat, Chalet Grizzli and Chalet Husky are right next to the ‘Coches’ bubble, and in good snow conditions you can ski back almost to the front door. On top of that, they are just 2 minutes’ walk to the high street, making them great for families with small children.

As well as a selection of bars, restaurants and shops, there’s also a creche, cinema and the Espace Paradisio – a spa & pool complex, with a jacuzzi, Turkish bath and treatment centre.

Chalet Pisteside and Chalet Chamois are in Les Coches, which was more recently but sympathetically built in keeping with its heritage using local wood, slate and stone.

Les Coches has all the amenities you would expect of a mountain village. Bars, restaurants, a crèche for children from just 3 months, plentiful ski shops, local gift shops, two ski schools and a well-stocked local supermarket.

Both of our chalets are right next to the piste, where you ski down to the Plan Bois chairlift out of Les Coches – from there you can either ski straight to the Vanoise Express into Les Arcs or choose to hook up with the Bijolin chair if you want to explore La Plagne. These chalets are perfect if you can ski – and if you are a beginner, we also have a courtesy driver service to drop you off at ski school.

Montchavin La Plagne has gained the coveted ‘Famille+’ label due to its family-friendly features – traffic-free centres; childcare; entertainment and non-skiing activities such as yoga, husky-rides, snow-shoe walking and the Espace Paradisio, a swimming pool and spa complex.

Boasting over 425kms of marked runs, the Paradiski is the third largest ski area in the entire world, but is perhaps less well-known by name than many others – far more skiers are familiar with La Plagne and Les Arcs, the two resorts that, connected by the Vanoise Express cable car, make up this impressive ski area.

Snow-Sure
Paradiski is a high resort – more than 70% of the ski area is above 2,000m. And there are not one but two glaciers, with skiing up to 3,250m – one in Les Arcs, and one in La Plagne. Combine this with extensive snow-making facilities on the slopes down to the resort villages, and you really can be sure of the best snow conditions available, whenever you choose to visit.

Vast choice of skiing
The Paradiski really does have it all – from cruisy, forest-lined blues in Montchavin La Plagne; to great red runs like Les Sources, which you can take at an easy pace if you are a beginner or hurtle down it if you like a bit of speed; to mogul-filled blacks that get your knees going; to the famous off-piste North Face of Bellecote. So no matter what your level, you’ll find something here to please you. After 10 years of living here, we’re still discovering little bits that we never knew!

Plenty of man-made snow parks
The popularity of freestyle skiing and boarding has never been greater, and Paradiski has plenty of places for you to express yourself. There are two massive snowparks, with a variety of different jumps from easy 18-inch-high “green jumps”, to massive, house-sized kickers for the more advanced (or foolhardy!) riders. There are two half-pipes if you fancy dropping in, the popular Fun Slope and boarder-crosses where you can race your friends to see who really has got what it takes. Come springtime, there’s even a few water-slides, where you can attempt to ski or board over a 10m water pool – one for the brave, and as much fun to watch as it is to take-part – this really needs to be a part of your trip!

Still not sure? Why not check out our “five great reasons to ski in Montchavin La Plagne” article? 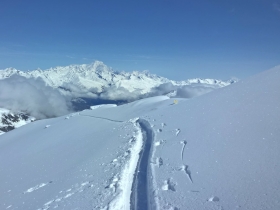 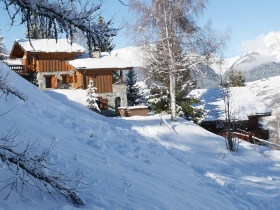