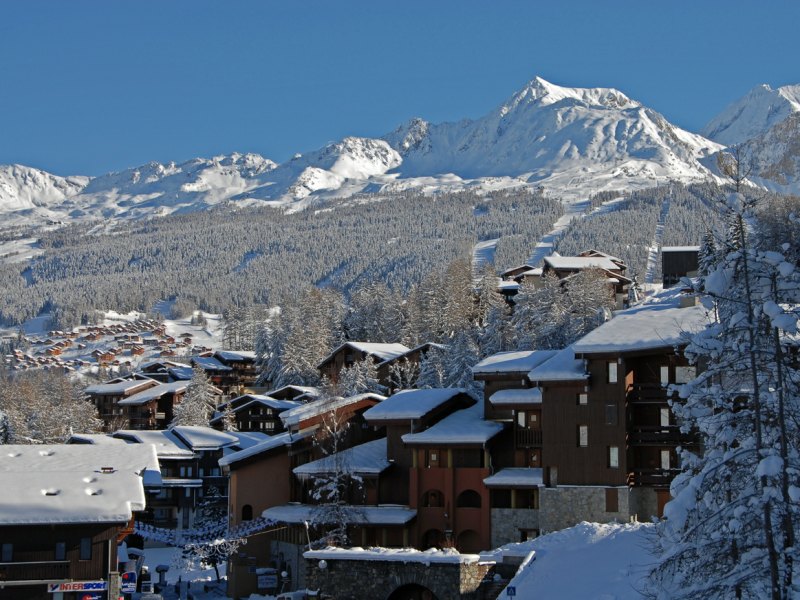 La Plagne is actually made up of 9 different village resorts, and one of the prettiest is Les Coches and its sister resort, Montchavin, known collectively as Montchavin-La Plagne.

A hidden gem, the resort is ideally placed to ski the entire Paradiski (La Plagne & Les Arcs collectively), is devoid of the large tour operators and instead features some reputable, independent chalet companies (like Alpine365!). Once people discover it, they just keep coming back!

Here are 5 great reasons to choose your ski holiday in Montchavin La Plagne.

1. Simply the best location in La Plagne
Montchavin La Plagne really is slap bang in the middle of the Paradiski, as it is at one end of the Vanoise Express, the iconic double-decker cable-car that connects to Les Arcs. The Vanoise Express was included in an article on the ‘world’s most impressive lifts’ in the Telegraph. The modern, six-man Plan Bois chairlift is the only lift you need to take out of Les Coches to reach the Vanoise Express and 4 minutes later, you are in Les Arcs with access to its 200kms of piste. Or you can choose to head into the heart of La Plagne instead and explore its 225kms of piste. It can take about 4 hours to ski from one end of La Plagne to the far end of Les Arcs, so if you want to take full advantage of a Paradiski lift pass, it’s highly advantageous to stay right in the middle – and that’s where Montchavin-La Plagne comes into its own.

2. Truly snowsure
Montchavin La Plagne is part of the Paradiski, a world-class ski resort, and the third largest in the world. Seventy percent of the skiing is above 2,000m, and it also boasts not one but two glaciers. So whatever the weather you are guaranteed snow – and lots of it!

3. You can take the ski train here
What better way to travel than to take the Eurostar ski train from London or Kent, and arrive at Aime or Bourg St Maurice train stations, only 20 mins from our chalets? It’s green, it’s often cheaper, and really is a stress-free way of travelling to resort. (If you do prefer to fly, however, Chambery is only 1.5 hours away)

4. A lovely village feel – great for families
Unlike much of La Plagne & Les Arcs, which is made up of high-rise 60s apartment blocks, Montchavin La Plagne has an authentic village feel and was originally a farming village with pretty cobbled streets. From time to time you can still catch a whiff of farmyard animals owned by the local residents in Montchavin. Les Coches was sympathetically built using local slate, wood & stone. The resort has gained the coveted ‘Famille+’ label due to its family-friendly features – traffic-free centres, childcare from 3 months, entertainment and non-skiing activities such as a cinema, ice-rink, husky-rides, snow-shoe walking and the Espace Paradisio, a swimming pool & spa complex. And the village centres are even car- free too!

5. Beautiful tree-lined, local skiing
Montchavin is at 1,250m and Les Coches is at 1,450m but as the slopes are north-facing and with the additional help of snow cannons, you are guaranteed great snow conditions throughout the year. Most of the skiing in the Paradiski is high, but the beauty of both Montchavin and Les Coches is that it is tree-lined, so in inclement weather, you can find refuge in skiing the forest pistes. The slopes also tend to be pretty quiet, as many skiers simply pass through on their way to Les Arcs, rather than choosing to linger a moment to ski here – meaning runs such as “Les Coches” and “Esselet” can often be skied without ever seeing another soul. Local off-piste is a well-guarded secret, plus if you get the last lift over from Plagne Bellecote (the 8-man Arpette) and then stop for a vin chaud, you can then ski all the way back through the trees, with the setting sun glinting through the trees – it really is magical.

So what are you waiting for? Get in touch and book your next skiing holiday now!